Falling Off the Semi

And Other Craziness From The Past Couple Weeks...

March 2nd, 2020
Our Past Couple of Week’s Have Included The Following…

Needless to say, it’s been busy. So, let’s begin. 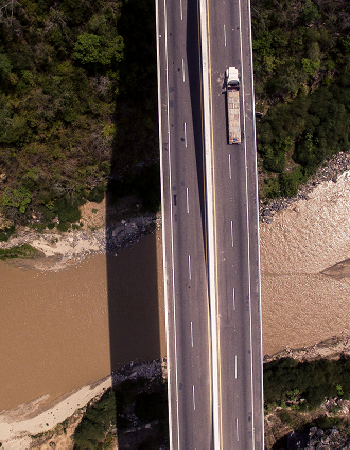 Our plan to raise the ceiling with two 2 ton jacks did not work. So, Rob went out and bought a 5 ton jack and proceeded to start the process over again. We thought that it would be no problem at all to get a 5 ton jack and a 2 ton jack to work together to raise our ceiling a few inches over the course of about a month. We were wrong.

Just the other day we noticed that not only were we not gaining inches, but the 2 ton jack fell completely down again and we lost that board. Rob decided that the teeter totter of raising the ceiling up only to have it fall back down again was going to hurt the house a lot more than if we just raised the ceiling in one pass. I couldn’t disagree with him. Our upstairs floors are super creaky and bouncy. This was a project he was going to have to save for a weekend work day to complete, because it would involve installing a beam as well.

So, we move on to my completely insane work week. Apparently I have a reputation for being dependable again…I should really stop doing that. It means extra work and my boss calling to tell me I’m being used as the guinea pig on the new runs he’s acquired. Ugh!

To boot, about a week before that I had found out from my boss that we were running emergency inspections company wide. I was already planned to go in, but the oil change on my truck took extra long because of this. I ended up spending a whole day in the shop and then having to run a load home. On the plus side, they finally replaced that windshield with the crack that has been driving me insane since I acquired the truck.

With all the extra work, I have also been taking a lot of runs into Chicago. Did you hear about that winter storm that hit Chicago and Northwest Indiana? Yea, I drove through that. That’s not when I fell off the truck, by the way. No. That was a week later in Indiana and Ohio when we had a nice amount of rain and cold come through, which iced up my steps. I was delivering in Gas City, Indiana when I stepped out to take in my paperwork. I hit the top step just fine and didn’t notice anything out of the ordinary. Unfortunately, that next step got me. I slipped and managed to land on both feet, but not before I tore my shoulders trying to catch myself. I didn’t realize the pain until a couple days later and have been healing from an injured shoulder. I’m sure helping Rob move his TV the weekend before this didn’t help.

I’m healing. Mentally and physically, because on top of being injured and working hard – I have spent nearly every day arguing with a pre-teen about getting his school work done. Ah! The wonders of homeschooling! I sooo don’t recommend it to anyone. We are already planning on putting him back in normal school for 6th grade, now that we are settling into our new home. He’s excited to make friends and be a part of a community again. We just had a conversation today about how he doesn’t think he is going to have homework in a regular school, because his prior schools had stopped doing that. Boy, is he wrong! That’s okay. He’ll find out for sure when the time comes. For now, he just thinks we’re nuts old people who don’t know what we’re talking about.

Alright, so I don’t know how to segue into ants. But let me tell you, we have ants. This house has so many bugs, I don’t know what to do. We have flies, spiders, weird wheel barrel beetles and now ants. They are the little tiny ones that like to crawl around on your counters. I went to set down my coffee mug this morning to find a swarm of them on our island. None of the other counters! The island is in the middle of the kitchen! It’s not even near a window! I have no idea what they found so appealing, but it is now all wiped down with vinegar water and I’m hoping they won’t come back for at least a couple weeks. This is after I found them crawling along the ceiling in the bathroom. I have yet to figure out how to deal with them there. I’m too short to reach a normal ceiling, let alone one that is higher than normal. 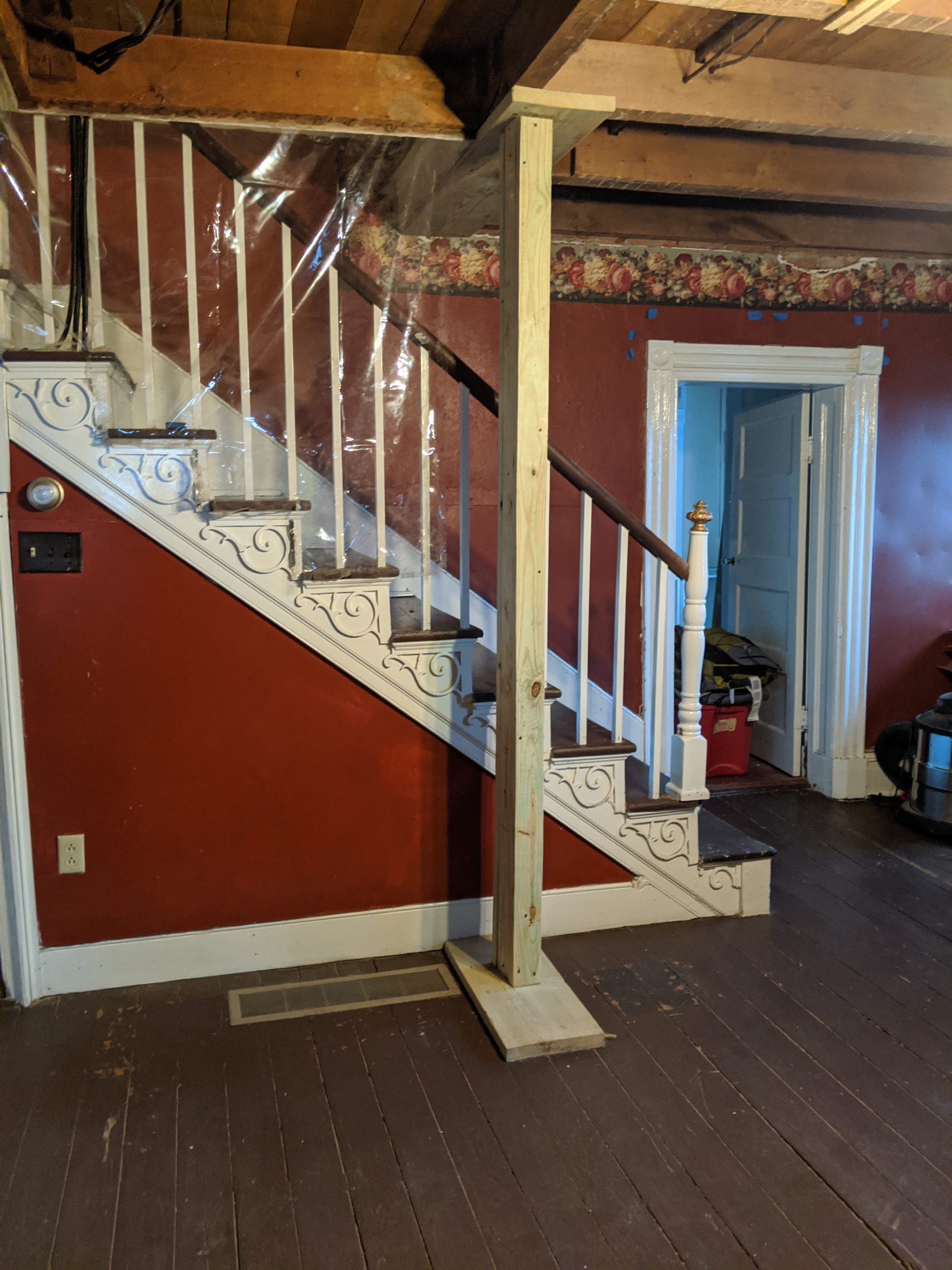 I’m finishing up the laundry and staring out at the dreary evening, preparing mentally for another couple of crazy weeks. My engine light is on in my truck, so back to the shop we go. Here’s to hoping for some calm to come. To those reading, I hope your weeks haven’t been quite as insane.

On a more uplifting note, Rob and I have started a garden. We are just seeing our first buds. Check out the picture on the right!

To end the past couple weeks, Rob finished raising the ceiling in the living room and installing the beam that I spoke about at the beginning of this blog. Yes, despite it being Monday, this is the end of our weekend. Rob and I now have Sunday’s and Monday’s off. So, today was the perfect work day for him while I spent the day running around collecting a kid from his dad and doing errands. He even swept and mopped the floor when he was done. I was so impressed! 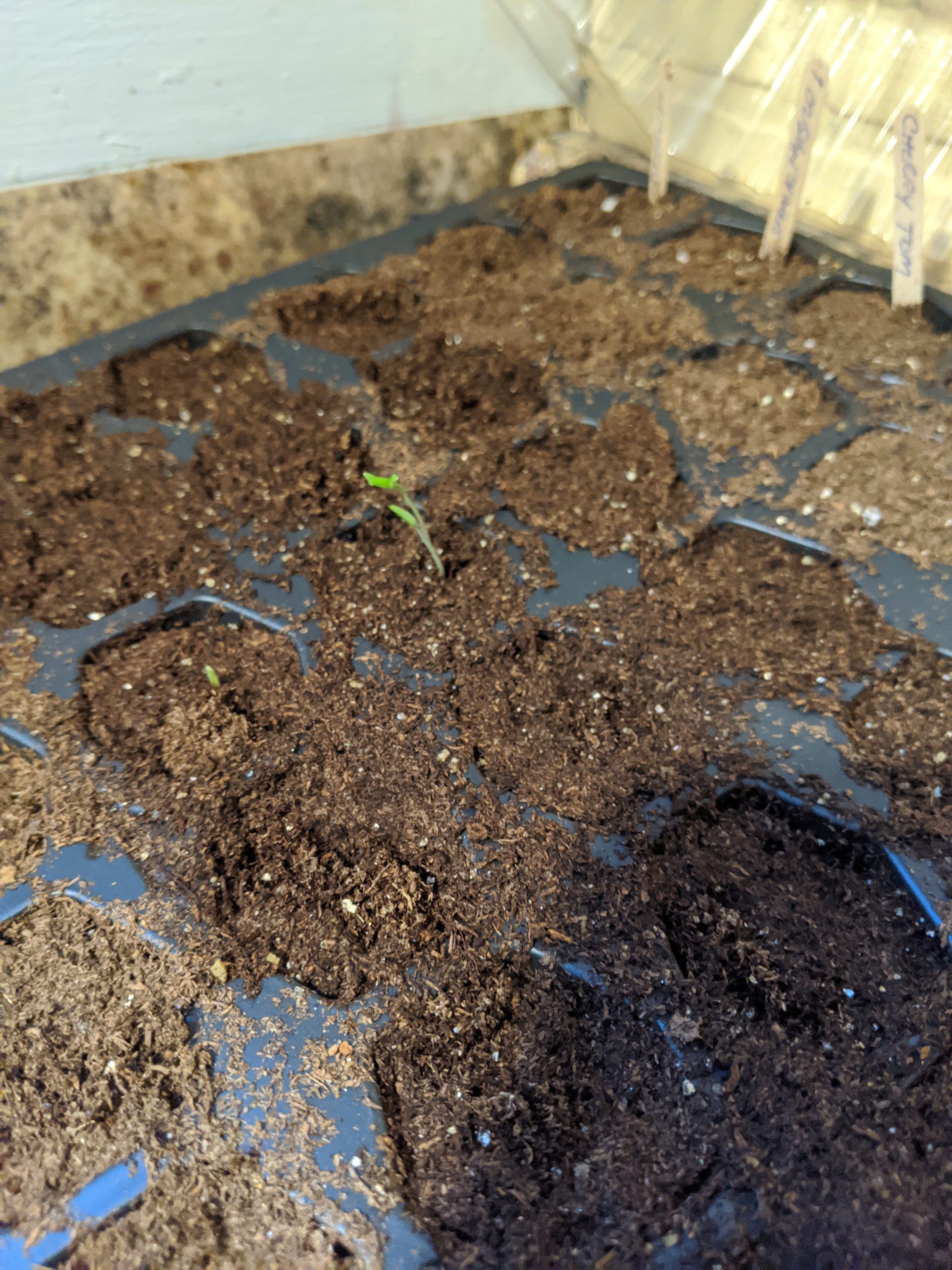 Opt in to our email list so that we can include you in polls, show you our progress as we go and keep you up to date on our blog posts.